This IEI Insight is provided by Ryan Coughlin, a Gail Werner-Robertson Fellow and author of a paper on intraday equity market reactions to macroeconomic announcements.

These are important because they have little precedent and stem from the U.S. economic downturn beginning in 2008. Federal Reserve actions include a funds rate between zero and one-fourth of one percent and quantitative easing one, two and three (QE1, QE2 and QE3), which ballooned the Fed’s balance sheet of bonds from $900 billion to almost $4.5 trillion by the time the programs ended in 2014. This study investigates the intraday effects of a realized “expectation differential” on equities, as proxied by the S&P 500, and compares these to interday effects.

In previous research bad news had a greater impact than good news when it was a surprise announcement. This is called the “sign effect”. In this case, the good or bad news acts as a signal or “sign” of future Federal Reserve policy. This “sign effect” is consistent with the economic theory of loss aversion, which states that people prefer avoiding large losses than realizing large gains. From 2000-2015, intraday and interday negative surprise announcement effects (bad news) were both greater than positive surprise effects, by almost 1.5 and over 5 times greater, respectively. These observed effects, shown in the figure below, support the loss aversion hypothesis and provide support for the conclusion that a “sign effect” occurs. 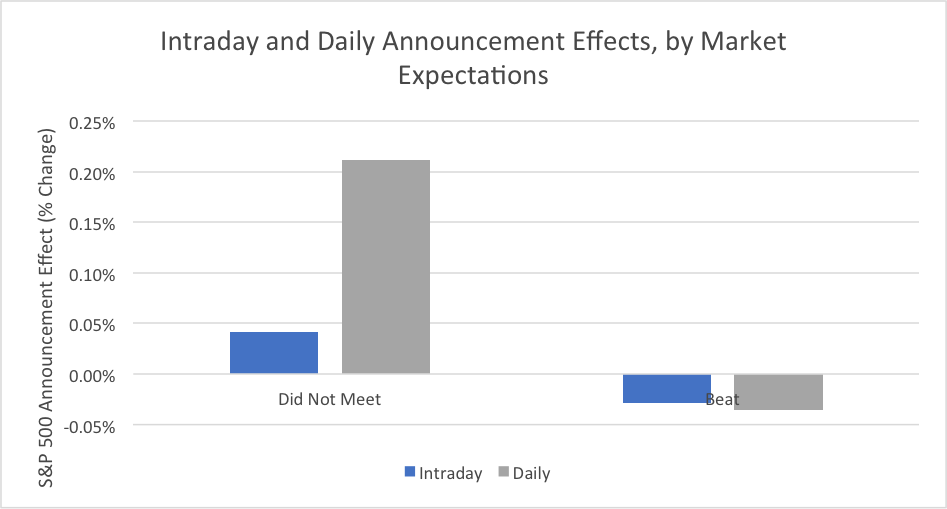 Markets’ intraday reactions to major macroeconomic announcement surprises were generally less significant than the interday reactions to the same announcements. In response to a surprise macroeconomic indicator release, one might expect an initial price shock in equity markets that dissipates over the remainder of trading hours. However, this was not the case, as the intraday announcement effects did not dissipate after the initial surprise. Instead, as shown in the figure above, the announcement effects persisted on equity markets, driving the daily announcement impact to be greater than the initial shock.