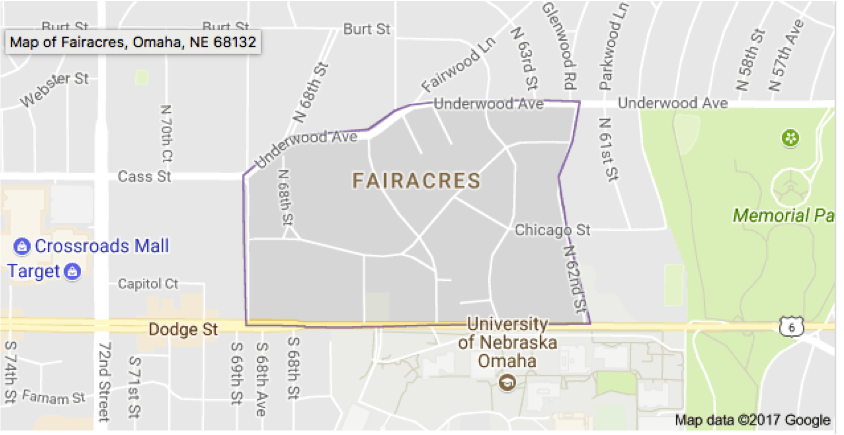 The following was written by Kevin Thomson:

The Fairacres neighborhood, located in a wealthy section of Omaha, NE near UNO and Memorial Park, is now on the National Register of Historic Places. The wealthy neighborhood was granted the honor by the National Park Service on July 24, 2017. At first, the designation may seem harmless. The neighborhoods listing on the National Register is a boon for Fairacres homeowners, but the benefits for the average Omaha citizen are less clear. Too many designations can cause problems for the city planners and limit the growth of affordable housing.

A working paper released by NYU’s Furman Center found that historical designations in New York raised property values and caused a decrease in construction inside the district. The costs of the historical designation and other land use regulation are felt more indirectly. According to a paper by researchers Emily Hamilton and Sandy Ikeda, the implementation of land use regulation – from minimum lot sizes to historical designations – decrease the housing supply and increasing housing and construction costs, a burden that falls hardest on low-income residents. And so while the designation might seem like only the preserving of history, Omaha should keep a watchful eye on rules and regulations that decrease the total housing supply that in turn drive up housing costs.

The historical honor comes after months of work by homeowners and local officials. As the article by the Omaha Restoration Exchange notes, “The designation is the culmination of efforts that stretch back as far as February of 2016 when Restoration Exchange, Omaha City Councilman Pete Festersen and representatives from the city’s Landmarks Commission began meeting with homeowners in the Fairacres neighborhood.”

The historical designation will complicate further development in the area. The honoring of historical importance by National Park Services, allows an advisory council to comment on all projects taking place within the historic area.

There are, however, multiple designations with different rules and regulations for historical areas in Omaha. The entry onto the National Registry differs from a designation as a Local Landmark or Landmark Heritage District. As the city notes:

“Listing as a Local Landmark or Landmark Heritage District grants a property, or grouping of properties, formal recognition as important components of Omaha’s historic built fabric. Such listing also provides protection from demolition or from alterations that may dramatically change the appearance of a historic property.”

In both cases, the designation increases the costs of further development in the neighborhood. All restrictions will chip away at Omaha’s reputation of affordability. A more specific case is recently when Fairacres fought off an unwanted development. In May of 2014, The Omaha World-Herald reported on a proposed apartment complex with the following headline:

Residents in Fairacres dig in their heels on proposed apartment complex

According to the article, the opponent’s claimed: “…the apartment complex would be too big and too densely built and populated.” Another resident of the neighborhood was quoted as saying: “We’re not opposed to apartments. We’re not opposed to density. It just needs to be good density.” In another incident in November of 2015, some Fairacres residents protested the demolishment of a historic mansion in the neighborhood, according to the Omaha World Herald.

Emily Hamilton compared this type of behavior, often referred to as NIMBYism (Not In My Backyard) to the mercantilist of the 16th and 17th century. Both seek to use state policy to increase their wealth by keeping prices high and avoiding competition. There is a short-term private benefit gained by stopping market transactions. Yet, in the long run, everyone suffers as the economy slows from reduced growth. The problem with historical designations is how closely related they are to NIMBYism

In the paper, she recommends Harvard Economist Edward Glaeser’s policy suggestion of limiting the number of historical designations a city can grant. For example, Fairacres becomes a Local Landmark, the honor would be removed from somewhere else. NIMBYism, like Mercantilism, goes undetected because it concentrates the benefits and disperses the costs. The historical designations benefit Fairacres homeowners but the dispersed costs go unseen across the city in the form of higher prices and less affordable housing.

The total costs of the Fairacres historical designation on housing affordability is indirect which is all the more reason that these types of honors and policies should be scrutinized more carefully. Moving forward, there should be an inclusive and citywide conversation about what should be preserved and at what cost.