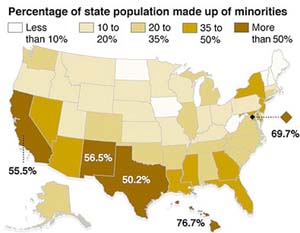 The 2040 Initiative as quoted in the Omaha World-Herald:

While that may create anxiety for some people, “rather than being anxious about it, we should say, ‘It is.’”

In 2012, minority babies represented more than half of all babies born in the nation.

In 2014, Joe Dejka reported last week, more than half of all public school children are minority.

In 2040, today’s children will be working adults, the muscle of our society. And the minority will have become the majority.

The actions we take now will determine the state of the nation in 2040.

Specifically, the demographic wave that we are already riding creates an imperative to address existing achievement gaps that leave our Black and Hispanic students trailing behind other students. If we do not cherish and invest in these children and youth today, we will find ourselves in a precarious situation a generation from now.

A recent article by Teresa Wiltz at Pew, “Racial Generation Gap Looms Large for States,” highlighted potential implications of a population that is younger and minority, older and white:

A generation ago, when California was ahead of the demographic curve, experiencing immigration and a shrinking proportion of non-Hispanic Whites in its population, anti-tax measures such as Proposition 13, passed in 1978, slashed the local property taxes that support schools.

California’s public schools, which had been first in the nation in the 1950’s and 1960’s, took a nose dive. The title of the documentary film “First to Worst” says it all.

Now California, one of the first majority-minority states, is swinging around to a different course: “California voters voted to increase taxes in order to channel $3 billion to school funding.”

Wiltz quotes Manuel Pastor, professor of sociology at USC: “We exported a lot of bad laws, from ‘three strikes’ to the criminalization of youth…But we’re experiencing a turnaround, so maybe there’s a possibility of us exporting good practices as well. We don’t want the rest of the country to go through the bumpy ride of alienation and disconnection that we went through.”

Has California learned through rough experience that failure to invest in kids doesn’t pay off?

If it has, can the rest of us learn from California?