Nebraska is at the forefront of the national news.

The case was an appeal from a Nebraska District Court holding that L.B. 1161, a statute passed by the Nebraska Unicameral that gave the Governor the power to approve the Pipeline’s route across the state and authorize the use of eminent domain, was unconstitutional. Ordinarily, such power lies with the state’s Public Service Commission. Former Governor Heineman exercised the L.B. 1161 power in January 2013 to approve the Pipeline, which led to the legal challenge.

In an ordinary case, the views of four Justices would be decisive, but under the Nebraska Constitution, a supermajority – five Justices – of the Court is necessary to hold an act of the Legislature unconstitutional.

L.B. 1161 – and Governor Heineman’s approval of the Pipeline – stand. And they stand even though not a single Justice of the Nebraska Supreme Court asserted their constitutionality.

The controversy began in 2012 when TransCanada, a Canadian corporation, submitted to the U.S. Department of State an application for a permit to build the Pipeline, which would cross western Nebraska to link to an existing pipeline in Steele City in southeastern Nebraska. The proposed route passes through environmentally sensitive areas such as the Sandhills and the Ogallala Aquifer as well as much farmland.

The permit process was established by Executive Order 13337, signed by President George W. Bush in 2004, and provides that the State Department shall make a recommendation to the President, who makes the final decision whether allowing this pipeline to cross the U.S. border “serves the national interest.”

Factors to be considered include energy, security, health, environmental, cultural, economic, and foreign policy; and the State Department is charged with consulting with at least eight other federal agencies before making its recommendation to the President: the Departments of Defense, Justice, Interior, Commerce, Transportation, Energy, Homeland Security, and the Environmental Protection Agency.

This process was on hold while the challenge to the Pipeline under Nebraska law made its way through the Nebraska courts.

With that hurdle removed, the Republican majority in Congress is gearing up to pass legislation ordering President Obama to grant the permit and approve the Pipeline. President Obama has said that he will veto such a law and continue to follow the prescribed permit process.

To date, it is not clear whether sufficient numbers exist in Congress to override that veto.

But a new melody is threading its way into this multi-year discord: The Keystone XL may fall not to law or to politics but to economics.

Oil prices are down and production is up. The Canadian tar sands are marginal sources of oil with high production costs. Evan Halper at the LA Times sums up the view of several experts with this analogy: “The market shift has put TransCanada in the position of a real estate developer vying to build a skyscraper during the depths of the mortgage crisis.”

Compounding this, last month Bloomberg reported that even though gas prices are low and domestic oil production is high, U.S. consumption is down: “the U.S. is consuming the least oil per dollar of gross domestic product in more than 40 years.”

All of this calls to my mind the 2005 U.S. Supreme Court case of Kelo v. City of New London.

In Kelo, the Court decided that industrial redevelopment consisting of a Pfizer-anchored project to boost the economic woes of the City of New London CT was a sufficient “public use” under the U.S. Constitution to justify a taking of private land and the use of eminent domain.

Kelo was a highly controversial decision that led many states to change their own laws to disallow such takings.

After all the storm and fury of Kelo and its aftermath, the development in New London was never built. 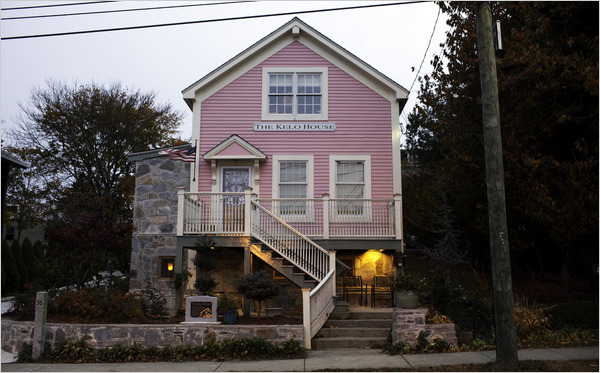