Ferguson, Staten Island, and the Arc of the Moral Universe 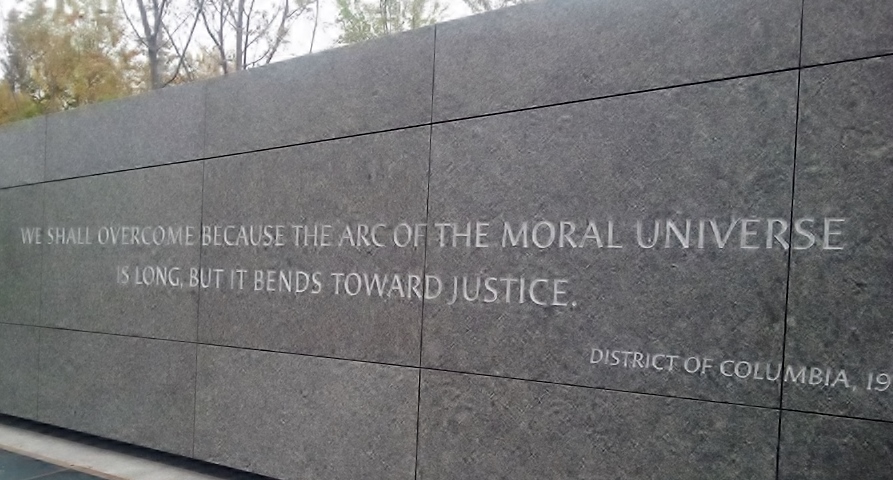 Martin Luther King Jr. once said: “…the arc of the moral universe is long, but it bends towards justice.”

In both incidents – the shooting death of Michael Brown in Ferguson, Missouri, and the chokehold-related death of Eric Garner in Staten Island, New York – the police officers were White and the unarmed citizens were Black.

In addition to being personal tragedies, these deaths fall within the larger arc of a racialized United States – from before our founding through the present and into the future.

Past: Bryan Stevenson, Professor of Law at New York University and Executive Director of the Equal Justice Initiative, has observed that in the course of our history the institution of slavery didn’t so much disappear as evolve.  It was replaced first by post-Reconstruction racial terror in the form of lynching and other types of violence, and later by segregation.

Segregation was replaced by the unequal racial outcomes – in criminal justice [mass incarceration], in wealth, in health, in education, in housing – that pervade our society today. Despite the inspirational existence of individuals who beat the odds, the essential fact is that race is still a powerful predictor of outcome across populations.

We can attribute these disparities to structural racism or institutional racism or something else. Regardless, they remind us that we have by no means arrived at a place of racial equity.

Present: The range of responses to the deaths of Michael Brown and Eric Garner and the legal proceedings following their deaths remind us of the very different realities of White and Black people and the lenses and stories through which we see our world.

In just one example, a Washington Post poll revealed that while 58% of White adults approved of the Ferguson grand jury’s decision not to indict, 61% of Hispanic adults and 85% of Black adults disapproved. The “net” non-White view was 68% disapproval.

That’s not just a divergence of opinion, it’s a completely different orientation.

Future: Just last week, an Equitable Growth Profile of the Omaha-Council Bluffs Region prepared with the Heartland 2050 Equity and Engagement Committee  demonstrated that we will grow better if we grow more inclusively and more equitably – if we grow together.

Just last week, Nebraska’s Voices for Children held a two-day conference, “Race Matters: Putting Race on the Table,” which brought together people from around the State who are seeking systemic change to advance racial equity. A consistent thread running through the conference was the recognition that Black and Latino children increasingly represent the future of our State – not just demographically but in terms of its health and well-being.

If we are to bend the moral arc of the universe toward justice – we need to work together because we are in this together.