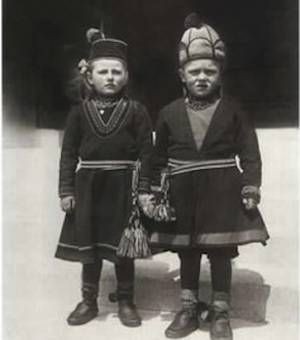 My Swedish great-grandparents came from Småland province to the U.S. Midwest in the 1870’s.  This summer, on a visit to Sweden, I found out why.

In Sweden at that time, there was an emigration “push” resulting from “peace, vaccinations, and potatoes.”

In the U.S. at the same time, there was an immigration “pull.”

Widespread literacy in Sweden, which began to take hold in the 1840’s and 1850’s, meant that Swedes could read about acquiring land in the U.S. through homesteading – about the American Dream.

Swedish “push” connected with U.S. “pull”:  One quarter of the entire population of Småland left, mostly for America.

In an earlier “border children” post, I identified some of the factors that are “pushing” away from Central America, especially Honduras, and “pulling” toward the U.S.: more versus less violence and more versus less inequality.

Though there are limited exceptions (refugees seeking asylum), immigrants are generally understood to cross borders of their own volition.

The border children, however, are governed by a statute that addresses human trafficking. Human trafficking is generally defined as occurring when people are taken across a border against their will.

But both my Swedish forebears in the 1870’s and the Central American border children today migrated because of a complex mixture of “push” and “pull.” The “push” limited their choices at home.  The “pull” offered more promise elsewhere.

It may not make sense to squeeze the border children into a “victims of human trafficking” box.  But, given all the “pushing” and “pulling” going on, they don’t fit neatly into the “immigrants” box either.

This entry was posted in Uncategorized. Bookmark the permalink.