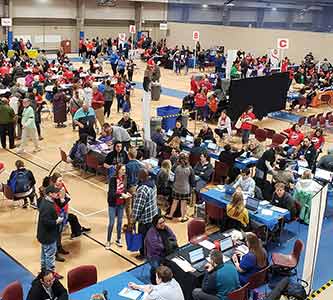 How long have you been homeless? I don’t really know. It’s been awhile.

The conversations taking place around the breakfast tables set up in the Kiewit Fitness Center had just this kind of tenor Friday as Creighton University played host for the 12th time to Project Homeless Connect Omaha.

The event is intended to be a one-day, one-stop opportunity for the area’s homeless community to plug into resources for housing, food, legal and medical issues and other benefits. Aided by several hundred navigators tasked with guiding guests through the multiple services Project Homeless Connect Omaha makes available, the day was awash in insight and experience.

“There are a lot of resources,” said Ronnie Nguyen, a senior in the College of Nursing who was participating as a navigator in his first Project Homeless Connect Omaha. “It’s almost overwhelming coming in and seeing what is available here. You could almost get lost. It’s a feeling I think a lot of homeless people have in their lives already. I’m glad we’re able to be here and serve.”

I’m sleeping on a floor, but I’ve got a nice mattress.

The stark realities of the world come drifting in the doors of the KFC every 20 minutes or so. Mostly, they are people who don’t look any different from anyone else in the world.

Alexandra Mihalakakos, a senior in the College of Nursing, has participated in three of these events in her Creighton career and said not one has gone by in which an interaction did not move her and change her thinking about homelessness and those it affects.

“It continues to amaze me, the diversity of the people,” she said. “The first year, I helped a man who was a lawyer. He lost his job and one thing after another. He didn’t fit the stereotype we have. But that’s what you find here: a different perspective. Everyone has a different story to tell.”

The ongoing, unfolding trauma of living on the streets is disorienting. The societal response is often that homelessness is a problem of the victim’s own creation and from which they can emerge whenever they wish.

“But we’ve seen that it’s a vicious cycle,” said Samantha Jacobsen, another senior in the College of Nursing. “Once you get into it, it’s hard to get out. We say, ‘Well, why don’t you do this or do that?’ But that’s so easy for us to say when we know the resources and have them at our fingertips. What if you don’t know?”

I haven’t seen him in a few months. I hope he’s OK.

“It was a lot of people we might not have seen otherwise,” Jacobsen said. “People who might not go to the doctor. You don’t realize how great the need is until you see a day like today with long lines of people waiting to get some help.”

The experience brought home for Mihalakakos the stress of life on the streets.

“It was a deeper dive into a patient community we don’t see a lot of in our clinical settings,” Mihalakakos said. “They’ve gone through so much we can’t imagine. Loss, fear. Those are a reality.”

But what do I do now?

Sitting down to breakfast with the guest she was serving, Jacobsen said she asked the man to tell her a little about himself. He just stared blankly.

“He said he’d never had anyone ask him that before,” she said. “I think we see homelessness as defining someone and that’s it. But there’s a person there.”

Nguyen said the stigma does not remove easily but falls too facilely into a dehumanizing attitude.

“We think it’s something the homeless can manage on their own,” he said. But, looking around, he said he registered the immense weight of what was happening on this day. “Look at everyone who has come here to get involved and given of their time. This is what we need. This is what true service looks like. It’s time and care, given freely from the heart.”

“We can be vulnerable with them,” Mihalakakos said. “Have those uncomfortable conversations, those awkward moments. It’s a realization to us of just where they’re coming from and what they face in getting out of that vicious circle. We all have trouble asking for help. How can we all learn how to ask?”

As volunteer staff readied themselves for the day, Ed Shada, BS’79, the founder and CEO of Project Homeless Connect Omaha, took a moment to address them and give encouragement.

“Remember,” he said. “If we only help one person today, that’s a great day.”

—
Creighton University is a Jesuit, Catholic university bridging health, law, business and the arts and sciences for a more just world.

The SCSJ blogs are meant to be a place for Creighton students, faculty, staff, alumni/ae, and friends to reflect on their experiences with programs sponsored by the office or related to its mission. The views expressed in these reflections, and all other blogs found on or linked to from this website, are those of the individual authors and are not necessarily those of Creighton University, the Schlegel Center for Service and Justice (SCSJ), or any of the University’s affiliates. The University and the SCSJ are not responsible for the actions, content, accuracy, or opinions expressed in these blogs.