Anyone that even kind of knows me could have told you that it wouldn’t be long before this specific edition of Throwback Thursday appeared. That’s because this is my favorite album of all time, and I am pretty much in love with Paul Simon. Prior to Graceland, few other artists had incorporated African music into their work. Another notable example of this is Talking Head’s 1980 release of Remain in Light (influenced by Nigerian Afrobeat artist Fela Kuti).

Graceland was released in 1986 amid turmoil not only in Paul Simon’s life and career, and in the global political sphere as well. Simon’s career had been on the decline in the first half of the 1980’s following the cancellation of a reunion tour with Art Garfunkel and a string of poor-charting albums. On top of this, the album came shortly after his split from actress Carrie Fisher. Lastly, it’s obvious that this album is heavily influenced by South African jaiva music (okay, it’s not that obvious, but you can at least tell it’s African). As we learned in world history class, South Africa was a controversial place during a good part of the 20th century due to apartheid. Because of this, a “cultural boycott” was placed on the country, and artists of all kinds were encouraged to avoid South Africa, in an effort to pressure leaders to abolish their institutionalized discrimination.

However, Simon traveled to South Africa to record anyway, and the album features several South African musicians. This broke the boycott by both traveling to the country and working with musicians (most notably Ladysmith Black Mambazo), something that was seen as extremely controversial. The rest, to borrow from a cliche and overused quote, is history. By mid-1987, nearly a year after its release, six million copies of Graceland had been sold, and the album continues to receive universal praise. It won Album of the Year and Record of the Year at the 1986 and 1987 Grammys, respectively.

This album spawned mega-hits such as “Diamonds on the Soles of Her Shoes,” featuring Ladysmith Black Mambazo, and “You Can Call Me Al,” famous for its music video featuring Chevy Chase and instantly recognizable synth riff. 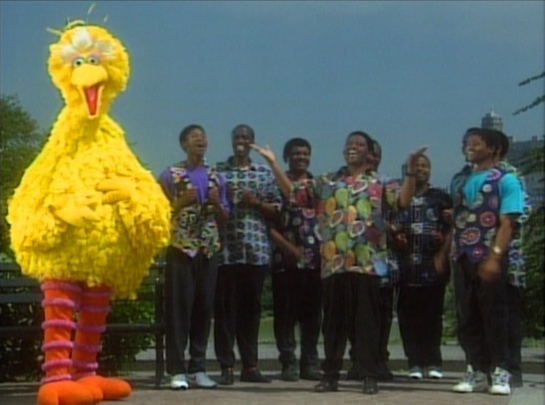 Ladysmith Black Mambazo on Sesame Street, which, according to my parents, was a favorite episode of mine in my youth.